2015 was an interesting year in digital publishing. A lot has happened in 12 months: the world’s biggest publishers flocked to tech companies to distribute their content, the ad blocking debate got to new heights, mobile search overtaking desktop for the first time and many more. In this two-part series, we will look into some of these trends and developments, such as the emerging of these new distribution platforms for publishers as well as an increasing role for mobile.

This year, alternative distribution platforms for news have really emerged in a whole new way. It was the year where we saw big tech companies like Facebook, Apple, and Twitter getting involved in news distribution in an effort to entice readers to keep using their platforms while consuming publisher’s content. In January Snapchat introduced Discover, the app mostly popular among teens. Discover provides publishers and brands such as CNN, National Geographic, Vice, and Cosmopolitan with a whole new platform to reach a younger audience with their publications and advertisements. Cosmopolitan alone gets 3 million views a day on Snapchat with its short emerging videos, powerful pictures, and small chunks of text.

In May, after months of rumors, Facebook unveiled its own answer to news distribution: Instant Articles. More than 350 publishers worldwide, such as the New York Times, BuzzFeed, The Guardian, and BILD publish interactive news articles directly on the platform. Instead of loading the publisher’s web page, the news article loads instantly on iPhones and Android phones while providing the reader with a mobile-optimized look and feel, and enhanced user experience. Publishers can serve ads within these articles themselves and keep 100% of the revenue. Or Facebook will do it for them and keep 70%. Initially, restrictions made it hard for publishers to generate sufficient revenue of Instant Articles, but Facebook decided to play nice with the publishers and loosen up their policies.

At its annual Developer Conference in June, Apple introduced Apple News, a new Flipboard-esque app and platform aimed at publishers and brands. The new app replaces the abandoned Newsstand and is available only to users in the US, UK and Australia for now. It lets consumers explore and read news of major news organisations and blogs based on their preferences. Publishers can either provide their RSS feed or use Apple’s soon-to-be-released special News Format to create interactive digital publications. They earn 100% of ads they sell or 70% if Apple sells them. Apple claims 40 million people are using the new News app but some publishers are still experiencing the growing pains of a new platform: they reportedly feel rather underwhelmed by the traffic they get and the analytics Apple provides.

All eyes were on Twitter as well this year. After disappointing growth figures, everyone was eager to know what Twitter would introduce to turn the tide. On October 6th, it introduced Moments, curated collections of tweets around breaking news, sports events, and entertainment. Moments is rooted in the company’s mobile app, but is only available to users in the US, Brazil and UK. It’s too soon to tell whether Moments is the product that will help Twitter regain its growth and create new momentum for the platform.

For publishers, these new distribution platforms create new challenges and opportunities. On the one hand, they provide publishers with a new way to reach a – younger – audience through their social network of choice and monetize them. On the other hand, publishers are becoming less independent and more dependent on big tech companies. A small change in their algorithm could have a big impact in terms of views and revenue, especially because people are not reading news on the publisher’s websites anymore but on the tech company’s platform instead. Clearly, there is a demand for social content next to (news) articles. At Crowdynews, we believe both publishers and readers will benefit from integrating social content directly on the publisher’s website or platform. Readers will be happier and engage more with content too.

As many of the new distribution platforms are mobile-centric and consumers spend more time on mobile devices, it’s no surprise that the role of mobile is increasingly important in digital publishing. According to Pew Research, as early as the start of the year, 39 of the top 50 digital news websites had more mobile traffic than desktop. Publishers such as The Huffington Post, USA Today, and New York Times attracted more unique visitors on mobile than on desktop. Mobile accounts for over half of BBC World News’ traffic, for example. Even more people use their phones to stay up-to-date during breaking news situations, such as the Paris attacks in November.

Secondly, Google confirmed there are officially more searches now on mobile than on desktop in 10 countries, including the US and Japan. Additionally, for the first time, global mobile internet usage overtook desktop this year, according to Silicon Valley-based Venture Capital firm KPCB in its 2015 Internet Trends report. 51% of the total time spent on the internet is on mobile devices compared to 42% on desktop, a trend that will likely continue in the years to come.

Facebook isn’t the only one aiming at publishers. Google understands that increasing role of mobile very well, too. This year they introduced their new open source AMP project, which stands for Accelerated Mobile Pages. Contrary to Facebook, AMP isn’t so much about creating a new distribution platform but rather about helping publishers provide a better and faster experience on mobile devices or as Google puts it: “[…] publishers can create mobile optimized content once and have it load instantly everywhere.” Of course, Google – one of the major advertising companies worldwide – will benefit from it too, as they secure placement of their ads on mobile pages. Almost all of the big publishers worldwide will be using AMP pages. The first AMP pages will arrive early next year and will be integrated with Google Search in February.

With the role of mobile increasing, publishers have to think about their offerings on mobile devices too. Due to social media, visitors are more likely to arrive at articles pages, especially on mobile. But people who arrive via social media are less likely to return or stay on the site for a long time and thus are consuming less pages. This requires a new approach. Take for example the Huffington Post, which redesigned their mobile pages to adapt to this new behavior on mobile, with good results – 50% higher time spent and 37% more unique visitors on mobile.

Also check the second part of this series where we look into video content and the introduction of live streaming apps in particular, as well as the ad blocking phenomenon that has been plaguing publishers and forcing them to make difficult discussions. 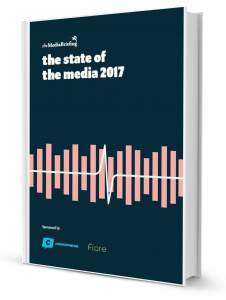 Recently, we partnered with TheMediaBriefing to identify the biggest hopes and fears of media executives for 2017.

Want some help and inspiration for your decision-making in 2017? Download the full report here: