Facebook Messenger and WhatsApp now process 60 billion messages a day, and over 2.5 billion people have at least one messaging app installed. WhatsApp (1 billion) and Facebook Messenger (900 million) take the lead, followed by WeChat (700 million) and LINE (215 million). Messaging app users are expected to grow to 3.6 billion within a couple of years, so it’s no surprise publishers are trying to take advantage of its potential. Let’s have a look at how publishers are using messaging apps now, and how they might in the future.

There is a transition happening from broadcast social media, such as Twitter – where you can reach a large number of people or the whole world essentially – to the narrowcast equivalent which revolves around your (closest) friends and happens within messaging apps. Messaging apps are now named as the “new social media”. At the end of 2015, messaging apps have surpassed traditional social networks. 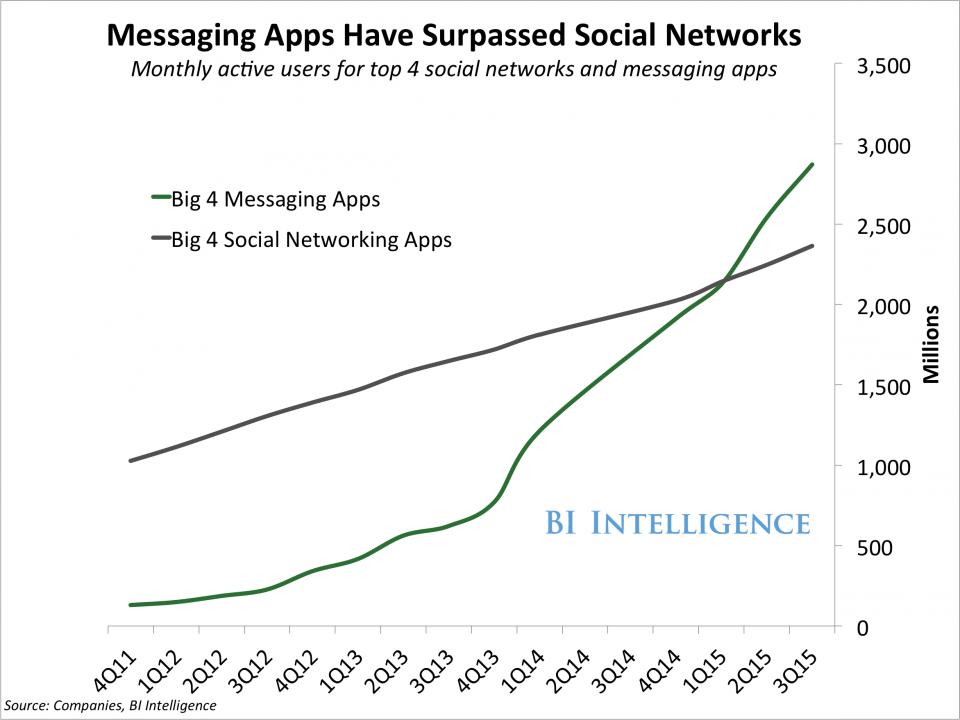 Snapchat is one of the apps fueling this transition. The messaging app, founded by 25-year-old Evan Spiegel, is especially popular among teens but is also gaining traction among other age groups. Official user stats are not available but it is believed to have around 200 million users, who watch an amazing 7 billion videos each day, compared to the 8 billion that are viewed on Facebook daily.

Spiegel understood that you’ll have to cooperate with brands and publishers if you want to make money. For its Discover feature, it is working with around 20 media brands, such as BuzzFeed, Vice and National Geographic, who publish content – mostly video but also short articles and photos – tailored to the platform and its audience. An approach that proves successful; some publishers attract each month around 20 million unique visitors to its Discover channels.

Publishers have also been experimenting with other messaging apps. Many publishers started offering news alerts through WhatsApp. And while the results were promising, the lack of a dedicated platform proved difficult for most of them. At its annual developers conference F8 last week, Facebook positioned WhatsApp as one-to-one in its family of apps. It doesn’t seem likely the company will start offering such a platform anytime soon.

This….. actually makes a lot of sense pic.twitter.com/T4VOQFKEcX

Publishers are already looking at other platforms too. For instance BuzzFeed, WSJ and New York Times are using WeChat to share their articles. WeChat goes beyond messaging and lets it users order taxis, food, buy products and even exchange money with friends. Meanwhile, Japanese LINE appears to be Wall Street Journal’s fastest-growing platform, reaching over 2 million followers of which 30% are commenting, liking or sharing the Journal’s posts. The Economist, BBC and Mashable also use the platform to share their content.

In the meantime, a new opportunity has emerged: chatbots. Before we get into detail, let’s have a look at what bots actually are. Re/code does a nice job explaining what a bot is: “A bot is software that is designed to automate the kinds of tasks you would usually do on your own, like making a dinner reservation, adding an appointment to your calendar or fetching and displaying information. The increasingly common form of bots, chatbots, simulate conversation. They often live inside messaging apps — or are at least designed to look that way — and it should feel like you’re chatting back and forth as you would with a human.”

Microsoft’s CEO Satya Nadella thinks the impact of chatbots will be equally as big as that of web browsers and touchscreens. Prior to this bold statement, the company had to take its Twitter chatbot Tay offline because it tweeted all kinds of racist things, which its users had taught it. While bots seem like the next big thing, they aren’t actually that new. Take for example business messaging app Slack which is really built on bots (integrations) and the Internet Relay Chat (IRC) protocol which has had bots years before Slack, Microsoft and Facebook started talking about it.

WhatsApp alternative Telegram was among the first consumer facing messaging apps to introduce a dedicated platform for bots. The messaging app created by Pavel Durov, former founder of Russian Facebook equivalent VKontakte, gained a lot of users when Facebook announced it had acquired WhatsApp. Telegram announced 100 million monthly active users in February, who are sharing 15 billion messages a day. One the same day Forbes introduced its own Newsbot for the platform, which already reached its second major revision. To further promote its platform, Durov is now offering $1 million in grants for developer’s best ideas.

At F8, Facebook also announced its roadmap for the coming 10 years. In the first 5 years one of its main focuses will be Messenger. The company launched the long awaited Messenger platform in beta, enabling developers to create their own chat bots by using a specific set of APIs. A few months prior to the launch German newspaper BILD was the first using the Messenger platform to distribute news. During the announcement, Facebook took another publisher to showcase its new developer platform: CNN is offering a news-digest bot for Messenger and so do The Wall Street Journal and TechCrunch.

Obviously Facebook is aiming to let its 900 million active users spend more time within Facebook Messenger. Next to Instant Articles, it’s another attempt to get people to spend as much time as possible within its walled gardens and getting to know their users (to create more relevant ads). Articles distributed on Messenger currently open in a browser view, but it seems likely they will eventually be replaced by Instant Articles as well.

But should all publishers jump on the chatbot bandwagon straight away? Probably not. The Messenger platform is offered as a beta for a reason: there are still some bugs to be ironed out. One of these issues: the bots are “painfully slow” apparently. There also isn’t a dedicated Bots Overview or Store. Bots can only be added by visiting its shortlinks, for instance m.me/cnn, which will open the Messenger app on mobile devices. TechCrunch’s Ron Miller thinks bots are a rather ‘primitive way’ of interacting compared to the thoughtful and nice looking apps we got used to. He feels we shouldn’t give that much credit to Facebook. “Bots won’t kill apps”, he concludes.

Want to find out more about the latest industry trends? Download the “State of the Media 2017” report below – we partnered with TheMediaBriefing who delivered a comprehensive report about the latest challenges and opportunities identified by media executives all over the world: